The Vampire Diaries: 8 Years and All the Feels

Back in 2010, an old co-worker told me I should check out The Vampire Diaries, which premiered the previous September on The CW. I wasn't too sure about getting into a new vampire show that wasn't from Joss Whedon/Mutant Enemy, but not being one to pass up a program recommendation, I gave it a shot - beginning with the season finale, in which Katherine Pierce returned to Mystic Falls, posing as Elena, catching everyone by surprise. I didn't think much of it at the time (as everything was new to me), but I soon got to love the doppleganger aspect of Elena being a decedent of Katherine in season 2. The cast became one of my favorites alongside Gossip Girl and I'd eventually get caught up on season 1.

One of the best things about the show were the always great storylines. Season 2 introduced Klaus and the original family of vampires, which lasted until season 4 when a special episode aired (leading to The Originals spinoff). Season 4 also introduced the immortal being Silas, which came to a head with one of the best season finale shockers they ever did (Stefan was Silas doppleganger). Stefan's journey was one of the best. I liked how the show started with him returning to Mystic Falls because he had to meet the Katherine doppleganger (after what would later be revealed to be an entire love affair Katherine had with both him and his brother, Damon, when Katherine arrived in the town in 1864). Most of the series he was good but seasons 2 and 8 partially focused on him being evil while his humanity was off, one of the most thrilling parts of the show.

Damon meanwhile wasn't so much evil as he was the bad boy. I grew attached to what would develop between him and Elena, as they'd grow close while Stefan was evil in season 2, and "Delena" would become one of the few couples I'd ship. Him and Bonnie being stuck in a prison world loop of May 10, 1994 was one of the fun plotlines of season 6. Nina Dobrev then left after the season, so Elena was put under a sleeping curse to write her out, thanks to Kai, one of the most evil characters TVD had. The show would get darker but didn't slow down without its leading lady, as we'd get to explore more of Stefan and Damon, and the relationship with their mother. Caroline would gradually develop feelings and a relationship with Stefan, which was nice to see progress.

TVD always found creative ways to bring characters back from the dead or return as ghosts/spirits/illusions. Alaric in particular was killed off and brought back a couple times throughout the shows run. Season 7 ended with Damon and Enzo falling under the sirens spell, forcing them to become evil. Season 8, the last one, had both Brothers evil for the first time in show history, which was awesome (after Stefan was forced to turn his humanity off). Stefan became human when he was stabbed with Elena's blood (which had the cure) in a desperate attempt to stop him after he killed Enzo (who at that point was good again).

The sirens and Cade, the ruler of hell, was a great final storyarc and gave the chance for past characters who had been trapped in hell to come out for a final appearance. It wasn't quite the way I thought they'd do it, but Elena woke up in the series finale and Katherine returned, who it turned out had been the real ruler of hell since she was sent there in season 5. In one of the series most surprising moments, Stefan sacrificed himself to make sure that the hellfire that was going to destroy Mystic Falls (but was ultimately stopped by Bonnie's magic) incinerated Katherine - and himself in the process - making up for all the evil things he had done. Looking back now, it was fitting as it was his story all along, if you go back to the pilot episode. Prior to his sacrifice, Stefan stabbed Damon with his blood (giving him the cure) so he could live a happy human life with Elena (!!!!) We then see Elena - writing in her journal from the afterlife - talking about finding peace. She reunites with her family in heaven, while Damon reunites with Stefan. The end.

I often imagined the series ending with Damon and Elena getting back together and maybe we'd see a flashback. This is more than I ever could've imagined and was a lot to process. To get nearly the ENTIRE supporting cast back for cameos was incredible and going as deep as they did - a look at what the other main cast (Caroline, Alaric, Bonnie, Matt) are up to in the future, and ending with Elena and the Brothers in heaven. One of the most satisfying finales I've EVER seen and the greatest to ever air on The CW. The only thing I sort of missed was an appearance from Klaus but he was mentioned in the flashforward with Caroline, something for sure to be followed up on next season on The Originals. So while this universe will continue at least another year (and will definitely go better than Buffy/Angel on rival networks), for now I say farewell to this wonderful show that'll be in our hearts forever. 💕 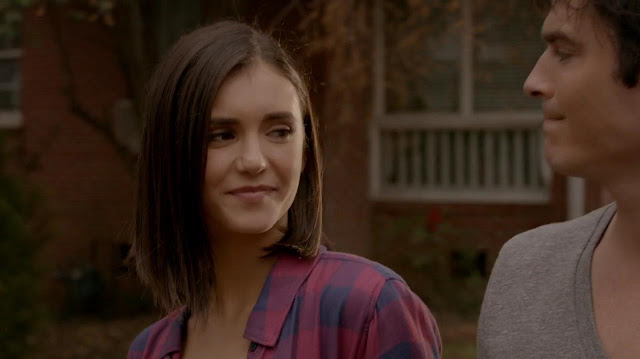