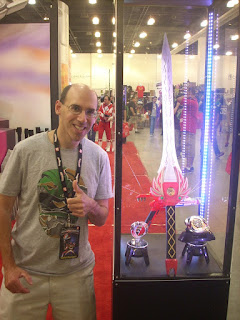 Another Power Morphicon has passed in the midst of a great time to be a Ranger fan. It was one of the the first times the convention took place in the middle of a good season, while Bandai is really ramping up the Legacy toyline in addition to the toylines for the show and movie.

WEDNESDAY/THURSDAY: I got in at Burbank after 1:30. My sister Sarah picked me up and I got settled at her place. Eventually we headed out to Little Tokyo Mall I had looked forward to visiting again and later on, we had dinner at Salazar - a restaurant co-owned by Sarah's boyfriend (also named Aaron). Afterwards we pretty much lounged around the house the rest of the evening.

Thursday afternoon the three of us walked around Santa Monica's 3rd Street Promenade and the Pier after I realized I hadn't been to the ocean in about ten years. That evening we went out for burgers at Umami and then got ice cream at Churro Borough. Back at home, we turned on Netflix and marathoned a couple episodes of Stranger Things.

FRIDAY: Sarah dropped me off at the Pasadena Sheraton Hotel at 2:30. I got settled in what would be the Ranger Bar room, hopped over to the convention center and picked up my stuff - Gold membership badge, convention coins, Dino Charge pins, a water bottle and posters (The shirts and hoodie would come later). I figured I'd just hangout and watch for people... Sure enough a couple people I knew came by (Tyler W, Quispy and Eric). At one point Paul Schrier passed by and said hi to myself and Quispy as we were chatting, and Ciara Hanna walked by as well.

Batz and Sean arrived (who'd be rooming with me) and the convention officially got underway at 4:00. As always there was toys EVERYWHERE - Megazords, figures, a lot of old '90s stuff for sale - plus Bandai had a massive exhibit complete with Dino Charge, Ninja Steel, movie and Legacy toys. I met Justin Nimmo (Zhane, In Space) and ran into one of my PR friends for many years called BurgundyRanger who I talked with awhile. At 6:00 I sat in on a panel about props and creating/writing the show, followed by a panel with Turbo/In Space cast and a villains panel at 8:00. Back on the floor for the last hour of the day, I met Kate Sheldon (Nadira, Time Force) and Andrew Gray (Troy, Megaforce). I metup with the guys and it was a pretty chill night in our room.

SATURDAY: Anticipating one of most exciting days ever, I headed out to the floor after 10:00 and got busy meeting Latham Gaines (Anton Mercer/Mesogog, DinoThunder) and Megaforce cast John Mark Loudermilk (Noah) and Cameron Jebo (Orion). Then it was showtime for the Dino Charge panel, who then, after Q&A, revealed the cast of Ninja Steel. In one of the biggest surprises I've seen in 23 years of Power Rangers, the new Blue Ranger (Peter Sudarso) was none other than the brother of Dino Charge Blue Ranger, Yoshi Sudarso (who had absolutely NO idea). So many feels I tell ya. 😄 Afterwards I watched a presentation from Bandai, who talked all about the upcoming toys and toylines, followed by the Megaforce panel at 1:00.

Meanwhile, Batz and Sean headed to the store and In-and-Out Burger. I popped over to Jennifer Yen's booth (Vypra, Lightspeed Rescue) and finally went back to our room to refuel about 2:30. Back on the floor, I met Megaforce cast Christina Masterson (Emma) and for a second time following Lexcon in March, said hello to Ciara Hanna (Gia). At 4:00 I went to the Forever Red panel and then met Sasha Craig (Kelsey, Lightspeed Rescue) making her convention debut. After the floor closed for the day, I pretty much hungout with the guys as we started to get ready for the evening. A concert with Johnny Bosch's band Eyeshine was going on so we caught a bit of that as well for a minute. At 8:00 we saw No Pink Spandex Live - a celebration of ten years of Lisa J's podcast. We then headed back up to our room and got set for Ranger Bar's Pink Dolphin Party. Several folks came by throughout the night and around midnight we went to the hotel bar to check out the action there. After lots of fun and snacking it was past 4am before the night finally wrapped up.

SUNDAY: I killed time on the floor a bit before going to a Yellow Rangers panel at 11:00, followed by a 6th Rangers panel. Afterwards, I met Azim Rizk (Jake), completing the Megaforce cast (the only full Power Rangers team I've gotten autographs/pictures from, besides Zeo), and I chatted with JC of Henshin Vault as well, who still remembers me from the Rangerboard gathering at the 2008 ACEN. After going back to the Ranger Bar room for lunch, I stopped by Alyson Sullivan's (Taylor, Wild Force) booth, and saw Bulk & Skull duo Paul Schrier & Jason Narvy's panel at 3:00. At 5:00 the convention closed for good. That evening Batz setup game systems to some of the TVs he brought and we feasted on Dominos, while I started to get the room straightened out.

MONDAY/FINAL THOUGHTS: Sean left early for an 11am flight and mine was at 2:00. It was nice getting home in a few hours but I'll probably drive back with Batz next time.

It was an awesome trip for sure. I enjoyed seeing my sisters current place which is a lot bigger than where she & Aaron were living in 2014. Going to Santa Monica for the first time was pretty cool too. One nice addition to the trip was having a portable phone charger, especially as I'm pretty much on my phone more and more with every vacation (and sometimes it's just easier than bothering with my ten year old camera). Another difference was there were less people than years past, as most of Mutant Chat has moved on to Lexcon, plus Ryland & Evan ended up not making it out.

Registration felt like it went better this year and I enjoyed getting all the stuff gold membership attendees got. One thing I tookaway from the weekend was I was definitely slower than usual with getting autographs/pictures, party due to going to Lexcon again in 2017 and holding out that I'll do more there than I did when I went this year (especially if the amount of Power Rangers alumni grows). I also plan on going to Emerald City Comic-Con next year for only the second time. So the break between trips to Pasadena is sure to be busy, at least next spring.

PMC '16 basically started what I'd call a four-year cycle of meeting a cast four years after their reveal at the convention. Take Megaforce, an unexpected surprise in 2012, who then had a limited autograph signing courtesy of Saban Brands in 2014 (while Super Megaforce was airing) and now in 2016 I talked to them all. I expect the same will happen with Dino Charge I'll hopefully get to see in two years. And as each PMC goes on, I think more and more about who I've met before that I ought to get an autograph/picture from again in addition to who I've missed out on previously and who's making their PMC debut. Besides the Megaforce cast, I mainly went for first-timers, but there were a few I hadn't quite planned on skipping. I'll definitely have a bucket list of names ready at the next PMC.

My Photo Gallery
Posted by Aaron at 8:23 PM No comments:

Dino Super Charge started out pretty excellent. Heckyl/Snide's debut was good, and I enjoyed getting more backstory plus another plot involving Iceage. The team not bothering to check the ship wreckage is still ridiculous (Everyones fine expect for MIA Sledge), but the episode was strong enough I could get past it.

Shelby had one of the best episodes with James Gaylyn as her dad in what was one of the funniest moments ever on PR. I was surprised Heckyl got outed to the Rangers so soon. Chase had a good episode as well in another genuinely funny episode, that also sorta made up for no Yellow Ranger.

I liked how Tyler's Energem got infected causing him to act like a t-rex and forcing his dad to finally appear as Aqua Ranger, but Tyler was a little too excited to have him back after he had been in hiding for so long. Leaving to go look for the Silver Energem was a decent way to write James off (since he's not main cast like Phillip anyway) and I'm glad Tyler was not OK with him going. I just hope when the Silver Ranger storyline picks up soon there's some payoff and it doesn't leave James as a jerk for not really even doing anything.

We then got what I thought was the worst non-clip show episode of Dino Charge. The baseball plot just didn't work for me and Riley's attitude was bad. The timeline of the games was terrible. I'd like to think the Amber Beach Earthquakes are a minor league team but it felt like it was supposed to be the major leagues.

And the first half wrapped up with a fun Ivan episode. Also, I thought the new opening feels like something from the Disney era and isn't as creatively edited as last years. I do like the font change after nearly the same for five years but I wish they had kept the cast looking at the camera in their credits. I'd have to say Megaforce even had a better stylized opening. Now there's a lot to look forward to coming up between the Silver and Talon Rangers, the new General, Sledge's return and how Heckyl's double personality is resolved, all capped off with a BIG finale apparently.