I like watching these Disney era seasons again several years later (In this case it had been a bit over 11 years since Mystic Force aired). I remembered it as being not that good, a common theme I'd say from around mid-SPD through late in Jungle Fury. Back then, it was fun to pick on the shows flaws (and listen to Rangercast do so), which led me to start blogging about every episode, which you can find here. But that was then. Now I appreciate Mystic Force a lot more.

The magic theme and Underworld really worked for me and the backstory of the great war that took place was fun to see again, which I now highly regard as the best structured story of the Kalish seasons (To this day, the only magic based season of Power Rangers). We had some good episodes adapting Magiranger footage which I loved (most notably "THE GATEKEEPER," "HEIR APPARENT" and "LIGHT SOURCE" two-parters). The humor was handled good too with Phineas and Clare doing most of it (Oh how I miss that today). Looking back, I kind of think of it as a precursor to Super Megaforce using Gokaiger. This season also gave us one of my favorite Green Rangers (Xander) and a fun guy in Chip (Yellow). I liked having John Tui back right after SPD as Daggeron, and Barnie Duncan playing Toby (and doing a brief Piggy cameo from SPD) was awesome.

Mystic Force still had some glaring problems... Nick, one of the worst Red Rangers of the shows history helped contribute to a bit of a downturn in the second half as he really got a lot of the focus, as well as how they kind of rushed through The Ten Terrors. Vida (Pink) was also pretty bad (especially early on), while Madison (Blue) just never got much focus. This season also infamously dropped the ball by making what many thought was a different show than what the premiere trailer looked like. After the premiere, the forest creatures weren't seen again until the finale, which had a laughable final battle with the seasons big bad getting overstuffed on magic to defeat him. They went a little too far with all the revivals as well, I thought.

The flaws are only part of an otherwise good story and while there are several seasons better, we've seen a lot worse over the years since. In 21 seasons (season 1 - Ninja Steel) I'd rank Mystic Force right in the middle. 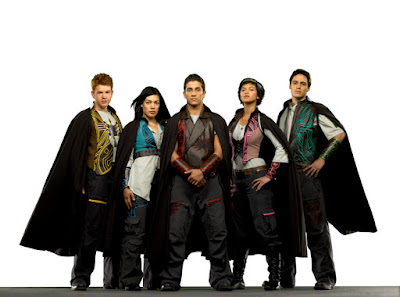